Our friend Peter Harrigan and the kind people at Saudi Aramco World magazine have given us permission to present Peter's article on the discovery of the archaeological site at Al Magar in remote southwest Saudi Arabia. We hope you will read this introduction, and follow the link to the full article.

When Mutlaq ibn Gublan decided to dig a birka (pond) to keep his camels watered, he arranged for a backhoe and drums of diesel fuel to be driven from the road to the site on his ancestral grazing lands in southwest Saudi Arabia. The spot he had chosen, amid finger-like valleys that cut through low sandstone hills, was near traces of an ancient waterfall, which hinted that, in millennia past, nature itself supplied more than a mere birka.

His pond was never completed. As he supervised the excavation, he says, "I spotted a smooth, shaped stone sticking out of the ground. I recognized it was an old and important object." He could tell at once it was a statue of an animal. It was buried upright, head toward the surface, he says. "I paid off the operator and told him to follow his tracks back to the road." 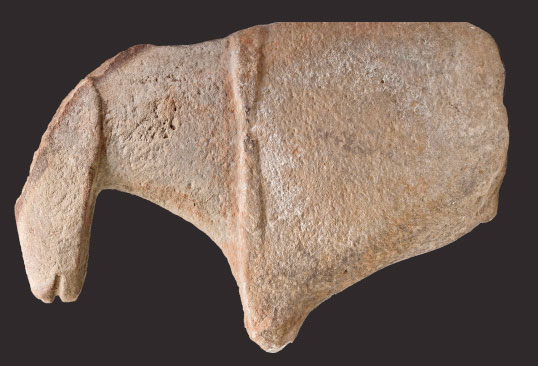 Above and top: The largest, and to date the most significant, of more than 300 artifacts found so far at al-Magar is a sculpture fragment whose head, muzzle, nostrils, arched neck, shoulder, withers and overall proportions resemble those of a horse, though it may represent an ass, an onager or a hybrid. Eighty-six centimeters (34") long, 18 centimeters (7") thick and weighing more than 135 kilograms (300 lbs), it is provisionally dated to about 7000 bce.

If the vertical band and the incision arcing over its muzzle are halter, lead or bridle markings, then people at al-Magar may have been domesticating horses up to 2000 years before anyone else in the world—but such speculation remains to be proven.

To read this article, please click this link [http://www.saudiaramcoworld.com/issue/201203/discovery.at.al-magar.htm] to be taken to the Saudi Aramco World website. This site is a treasure, and we encourage everyone to sign up for the magazine, which is available to anyone interested in learning more about the Arabian culture.