Al Khamsa horses are blessed with a rich heritage: the Ancestral Element concept was developed to help people identify the history of these horses.

By definition, they descend entirely from horses that can be reasonably assumed to have been bred by the migrating Bedouin tribes of the greater Arabian peninsula, an area which spans more than 1,500 miles from east to west and almost 1,800 miles from northern Syria to the bottom of the peninsula in the south! Within this vast area there were many dozens of tribes and clans. Certainly there was never one unified breeding program used by all of these peoples. The Bedouin obviously appreciated a variety of bloodlines and types. Diversity of type is evidenced by both photographs and written descriptions of Bedouin horses. 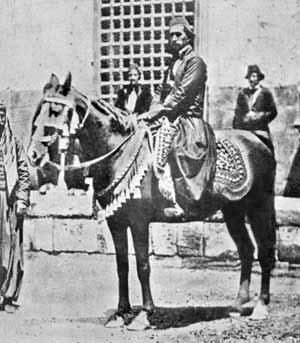 EGYPT is divided into EGYPT I and EGYPT II because of the long time frame and varied history involved. Of the thousands of Arabian horses imported to Egypt prior to about 1900, only a few managed to breed on and become Al Khamsa Foundation Horses. These are the EGYPT I horses which include the horses of Abbas Pasha, Ali Pasha Sherif and other breeders in Egypt who imported Foundation Horses between about 1840 through c1900. All modern Egyptian and part Egyptian Arabians trace to most of these Foundation Horses. It is no longer possible to find horses of strictly EGYPT I ancestry. All are combined with at least one other Ancestral Element, most frequently BLUNT.EGYPT II Foundation horses are associated with the Royal Agricultural Society (RAS) Arabian breeding program, which was established in 1914 and originally based on available bloodlines. Five additional Foundation Horses that were imported to Egypt by private individuals were utilized by the RAS and are included in the EGYPT II Ancestral Element. The RAS also provided pedigree information of the parents of a mare imported to the USA and those parents are included in EGYPT II.

BISTANY: Khalil Bistany was active in the Hamidie Hippodrome Society of the Chicago World's Fair of 1893. He and his family imported three horses from Syria from 1929–33. Of these, the stallion *Al-Mashoor left eligible Al Khamsa descendants.

BORDEN: Spencer Borden established an Arabian breeding program in the USA in 1898 with stock exported from England which preserved lines to three Foundation Horses imported there.

COBB: While in Saudi Arabia in connection with ARAMCO, Connie Cobb bought the stallion *Furtha Dhelall from a member of the Dawasir tribe and imported him to the USA in 1966. She also imported horses from the SA'UD and JALAWI Ancestral Elements.

CRANE: Charles Crane, a member of the international King-Crane Commission on Middle Eastern Affairs in 1919, imported *Mohalhil to the USA in 1929, a stallion he received as a gift from the Saudi Arabian Minister to Cairo. He also imported two mares of the SA'UD Ancestral Element. This, along with EUROPA, are Al Khamsa's rarest Ancestral Elements. Both exist only in combination with other Ancestral Elements.

DWARKA: An 1892 stallion, the Foundation Horse Dwarka was imported to England where he sired two Al Khamsa-eligible foals that were in turn imported to the USA.

EUROPA: Sixty-two Foundation Horses obtained by both private and governmental studs of Europe, primarily the Weil and Bábolna Studs during the 19th century, were preserved in combination with EGYPT I and BLUNT Ancestral Elements. There are only a few horses in North America tracing to this old European stock, and the lines are also scarce in Europe. In 2007, Al Khamsa approved the entries of  34 new Foundation Horses and 81 more ancestors of European foundation stock, primarily from the Bábolna Stud. Descendants of these horses that are otherwise eligible are automatically eligible as Al Khamsa Horses if they come to North America.

HAMIDIE: In 1893, Ottoman Sultan Abdul Hamid II granted a group of Syrian businessmen permission to take authentic Arabian horses to the Chicago World's Fair for exhibition purposes only. The Hamidie Society, as it was called in the USA, imported 40 horses, but financial and other problems prevented the return of any horses to the desert. Five Foundation Horses are designated HAMIDIE, which exists only in combination with DAVENPORT and other Ancestral Elements.

JALAWI: Three Foundation Horses came from Ibn Jalawi (Jiluwi), a relative of the Sa'ud family and Governor of Al Hasa Province. These horses were gifts to various Americans living in Saudi Arabia during the ARAMCO period.

KHALIFA: The Khalifa family has ruled the island of Bahrain off the east coast of Saudi Arabia since the late 1700s. Two horses from the Khalifa studs were imported to the USA. NOTE: Twelve Foundation Horses supplied by the Khalifa family to Egypt during the 19th century are included in the EGYPT I Ancestral Element.

MIRAGE: A 1919 stallion, *Mirage was owned by Lady Wentworth in England before being imported to the USA. His only Al Khamsa descendants are from his get in the USA.

RICHARDS: While living in Saudi Arabia in connection with ARAMCO, Marie Frances Richards obtained a mare which she bred to a friend's stallion. *Jamalah El Jedrani, daughter of these two Foundation Horses, was imported to the USA in 1963.

TAHAWI: Three mares, purchased from the Tahawi clan of al-Hanadi tribe in northeastern Egypt by Ahmed Hamza of Hamdan Stables, have living descendants in the Al Khamsa Roster. These three mares, Bint Barakat, Folla and Futna, were accepted onto the Roster in 2011. A small group of living Tahawi horses in Egypt were approved as automatically eligible Al Khamsa horses if they come to North America. Their 64 new Foundation Horses and 106 ancestors will be found in the Online Roster.