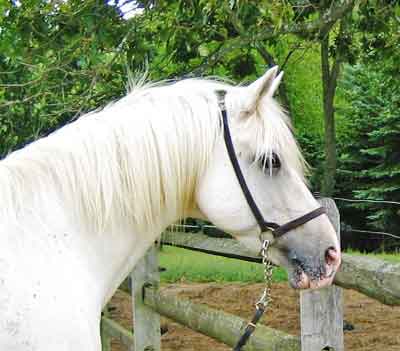 A 1986 grey Mlulshan stallion bred by Shaykh Muhammad Ibn Salman al-Khalifah, Bahrain, and presented by him to Bill Biel. Imported to the USA in 1988 by Biel. M118 in the Amiri Stud Book of Bahrain. 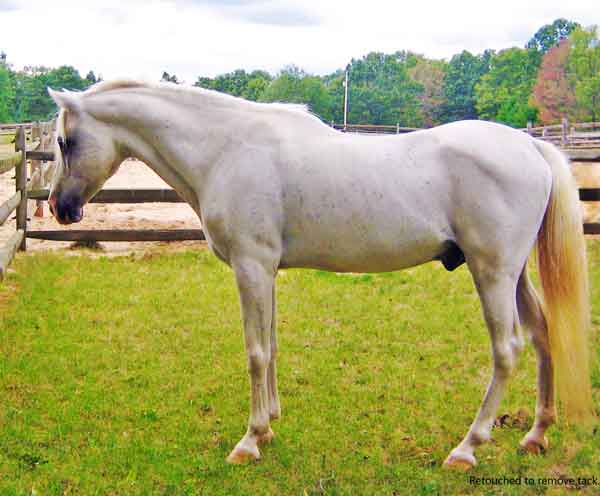 Mlolshaan Hager Solomon, photos taken September 2010 by Jenny Krieg. The body shot has had the tack removed by retouching, but the conformation of the horse has not been altered.

Solomon, owned by Bill Biel in Michigan, is the only asil stallion straight from Arabia Deserta in the US—i.e., one who was actually born there.

Thank Heaven, 2003gm ,  was bred by Catherine Fye of Michigan. She is not only rare because of being by Solomon, she is also rare because she contains the Ayerza Ancestral Element, and also the code orange line of *Sunshine, *Tiara and *Nufoud.   In 2014 Thank Heaven foaled a grey mare, Mi Blue Heaven  by DB Khrush a 1997gs bred by Rodger and Mimi Davis of Illinois and of Sa'aud  bloodlines.   As of this writing Thank Heaven is currently owned by Monica Respet of Pennsylvania and Mi Blue Heaven is owned by Laura Fitz of Michigan.  Monica plans to breed Thank Heaven for a second foal.

In 2010, Jenny Krieg of Maryland partnered with Rodger Davis of Illinois to send two of the Davis mares to be bred to Solomon. Both mares descended from modern desert breeding. One mare lost her foal, but DB Kalila (AAS El Hezzez x Desert Kalila by *Furtha Dhelall), a 2002 'Ubayyah of Saudi lines going in tail female to *Mahraa of Prince Saudi Ibn Ibn 'Abdallah Ibn Jalawi produced a filly for Jenny Krieg.   This Solomon daughter,  Ubayyat Al-Bahrain  2011gm,  is currently owned by PJ Altshuler and her huband Marwan Abusoud of Texas.