All purchases support our dual mission of preservation and education, and are deeply appreciated.
Please allow 4-6 weeks for delivery.

0 item(s) - $0.00
Your shopping cart is empty!
Welcome visitor you can login or create an account.
HomeMy AccountShopping CartCheckout
Categories

NEW are articles and discussions written about the Al Khamsa Arabian horse and its history, how to evaluate information about it, how to set up a breeding program in a preservation breeding tradition, an annotated bibliography for further explorations.

NEW is an expanded presentation of the Al Khamsa database of 30,000 horses, current to 3/31/2007, on CD, with all the bells and whistles available through computer technology: extended pedigrees, generations of descendants, pedigree notes and all fully linked for easy usage. No special programs required.

NEW is the addition of COLOR. A color section of photos will present the Al Khamsa Arabian today in its best light.

CLASSIC is the quality of information you expect from Al Khamsa, Inc.

Al Khamsa Arabians III was published in 2008, with the database available in CD form, and it is certainly the most complete book in the series. The Table of Contents gives the reader an idea of what a wealth of information is available in its 400 pages. 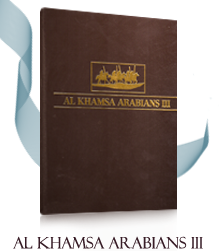 The next step toward the goal of learning as much as possible about the Horse of the Bedouin was Al Khamsa Arabians, published in 1983. Foundation Horses were identified, and divided into Ancestral Elements for better understanding. An anthology of out-of-print books and articles was also valuable.

As enormous a job as that was, it pointed the way to even more material, and years were spent collecting data over the next decade. Al Khamsa Arabians II (a few copies still available) was published in 1993 and contained much new material. Ancestors were divided into those that had registration in a stud book, and those whose information was more anecdotal. That included many valuable lines in Egyptian breeding, and a Pre-Registration section was begun to accumulate information about them, in the same way as information was collected about Foundation Horses.

Something important happened after the 1993 book was published: Computers, DNA research and the Internet changed everything. People from around the world that were interested in the history of the Arabian Horse were able to be in touch easily. Databases were able to be produced in affordable CD format. Mitochondrial DNA research made it possible to come to some definitive conclusions about some lines of Arabian Horses.

Al Khamsa Arabians III was published in 2008, with the database available in CD form, and it is certainly the most complete book in the series. The Table of Contents gives the reader an idea of what a wealth of information is available in its 400 pages.

About Arabia and the Bedouin Tribes

Evaluating the Documentation about the Al Khamsa Arabian Horse